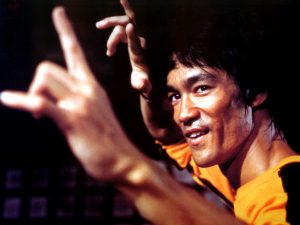 “The best example, which is definitely a successful one, would be Bruce Lee and his form known as Jeet Kune Do,” mom’s statement was stunning.  All of us suddenly became very attentive.

“No! He had used the concepts of cross training to the best of the development of his own martial form, Jeet Kune Do, a discipline which pursued development of the individual to reach his maximum physical potential and to go beyond. Perhaps he did not even know about cross training,” mother said.

“You have not said what is cross training and just generated my interest by dropping the name of Bruce Lee,” her friend said impatiently.

“With the advent of Triathlon competition and its worldwide popularity, cross training came more into application. Olympic Triathlon consists of three events — swimming 1.5km, cycling 40km, and running 10km one after another without break. They had to use different group of muscles for the different events. So they included what they called as brick training which is swimming and running or swimming and cycling.”

In swimming, the body is suspended. The upper body is used more than the lower and there is no impact involved in swimming. In cycling, which immediately follows the aquatic habitat work out, throws the body into a series of adaptational changes. “These changes were beneficial for the triathletes. This has been conveniently and comfortably extended to all forms of training athletes,” my mom explained. “The cross training induces changes as per H Tanaka’s (author of Effects of Cross Training) finding in 1994 that cycling produced beneficial changes that enhanced the running. He also proved that cyclists had higher muscle enzymes to produce more ATP (adenosine triphosphate) than trained endurance runners.” Mark Allen, six times Hawaii Ironman Triathlon champion, also believed that his heavy cycling helped him to improve his running.

“What is this Ironman Triathlon?” the friend asked. “Ironman Triathlon is an annual event being held in Honolulu, the capital of Hawaii, since 1978,” my dad said. “You need to compete in three events consecutively — a 3.8km of swimming, 180km of cycling and 42km of running. The race starts at 7am and the participants must complete the race before midnight. That is exactly 17 hours to complete the race.”

“This sounds like an Auschwitz camp,” the friend said.

“If that is Auswitz camp what about the Double Deca-triathlon, which has 76km of swimming, 2,600km of cycling, 844km of running covering a distance of about 4,520km in about 30 days,” my mother explained.

The friend was aghast. “How is that connected to Bruce Lee?” he asked as he regained colour.

“The principles of cross training have been used for more than two to three decades. Bruce Lee used the principles to empower his training. Cross training is done to ensure the transfer of training benefits from one sport to another. It is similar to any business organisation that teaches its employees skills that are not their area of specialization. It is done to ensure they’re better equipped for crisis management or unforeseen circumstances. To expect the unexpected, Bruce Lee said. A direct improvement of performance through an alternative mode of training, to maintain training stimulus during the rehabilitation of an injury etc, are the benefits of cross training. I think no one has used it better than Bruce Lee,” my mother concluded.

“Unfortunately research does not fully corroborate the finding.

Especially in elite level athletes who focus on one particular sport, it, perhaps, may cause injuries. At the same time, I agree with the fact that Bruce Lee did succeed in his pursuit that he attained immortality through his great belief which he transferred to the martial art world. You can definitely call it cross training,” my father agreed with a proud smile.

Keep garbage vehicles at bay for a healthy heart