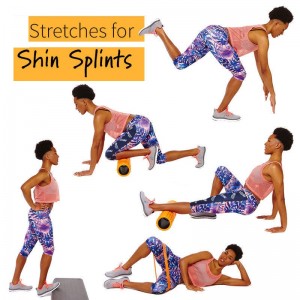 My friend has severe pain on the right leg, below the knee and above the ankle, whenever she runs. She is not able to complete her run and is forced to walk to complete her warm-up,” sister complained to dad.

“This is something people used to call shin splints,” dad replied.

“What do you mean they used to call them shin splints?” the friend asked.

“The shin splint, an obsolete term, was used loosely for many conditions that were not diagnosed. The various tissues that could be involved are bone, blood vessels, musculotendinous insertions, nerve entrapment, or a thick fascial covering,” dad said.

“The word fascia refers to a thin covering of the muscles. It has nothing to do with the face. The changes that happen to the bone and periosteum are referred to Chronic Tibial Periosteitis. Some books call it Medial Tibial Stress Syndrome (MTSS). These can set the stage for a stress fracture, which is the ultimate result of a repeated insult to a bone,” dad said.

“You mean a shin splint would ultimately lead to a stress fracture?” the friend was surprised.

“Yes! The running surface, distance run, footwear, mechanics of the run and tightness in the muscles could be considered as factors for causing MTSS. In people who are running regularly, it may happen if the sudden increase in mileage is more than what the bone could adapt to. In people who have never run, it is due to poor mechanics of running and muscle weakness where the bone is loaded instead of the muscle,” mom said.

“Muscle, as a soft tissue, absorbs more load than the bone during the impact of the foot on the ground. The running mechanics need a close scrutiny to avoid slapping of the foot that causes more impact loading. During a marathon, the impact loading is calculated to be 3,000 tonnes,” dad added.

“The muscles covering can be so tight that the normal increase in the girth of the muscle during an exercise bout would now result in a compartmental syndrome. So it is essential that the stretching involves muscle and its fascial covering also,” dad said.

“Tibialis posterior muscle, which maintains the arch of the foot, and soleus and gastroc muscles in the calf is another group in the back of the leg that can be tight and cause an imbalance, which would cause pain in the shin. The high-arched rigid foot, pes cavus, and flat foot, pes planus, can both cause leg pain. Excessive hyperpronation, which may be increased due to Morton’s Foot formation, would be a factor for the pain,” mom added.

“Hyperpronation causes increased torsional forces on the tibia and fibula. This may cause MTSS or a stress fracture. The pain caused by compartmental syndromes would subside immediately. In the case of chronic tibial periostitis, the pain would not subside immediately even after we stop the activity,” dad said.

“How does one know that it involves the bone or muscle?” the friend asked.

“History is the main key for knowing whether the pain comes from vascular or bony causes. There are nearly 30-40 conditions to be ruled out under the term shin splints. Investigations would definitely help in the diagnosis of a specific condition rather than a vague term like shin splint, which is of no significance to the athlete,” dad said.

“What is the treatment for it?” the friend asked.

“Correct the running mechanics. Stretching exercises for the appropriate muscles and fascia that are tight. If it is a stress fracture, a bone scan is the only way to diagnose it early. X-ray finding happens only later. R Natarajan, the national record holder for 200m had stress fracture in three places, and was expected to be out of action for four months. He returned to competition in less than 25 days by using aqua therapy and ran his life best timings in both 100 and 200 metres,” dad concluded.