“First of all I would like to introduce myself as Sunder ratan a 49 yr old resident of Banjara hills Hyderabad. For the past year I have had been suffering from a pain in the left lower back that cropped up every now and then. when it became intolerable I found it difficult to walk I visited a reputed hospital that made me go through a few scans and a couple of prominent orthopedic surgeons informed me that I had a weakening of the sacroiliac joint and even showed me what it looked like a slight disintegration of the joint. I was asked to desist from eating seafood and was requested to have an expensive injection of some imported medicine (which had a possible chance of being a crore) I was also informed that this could have side effects. Having heard from friends in chennai about SPARRC institute I decided to walk in one morning.

Well I might sound like an absolute convert but one sitting later I was convinced all the above diagnosis had been wrong and three sittings later I was perfectly fine. Barring their treating me for my problem via physiotherapy I was also made aware of the reasons for my debility and preventive measures to avoid straining my back in future. when I hear somebody tell me about their back and other problems today I wish I had somebody like me tell me about the SPARRC Institute a year back“ 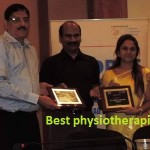